I got an I-Phone 5 partly because everyone said it was the best camera phone ever or at least as good as any other camera phone. OK, so it’s really not fair and I didn’t really expect it to stack up well against my digital SLR, but wanted to compare what it could do.

My primary digital SLR is a Canon  T1i/ 500D . Good but not great (with good low light power) coupled with descent lenses. All of the pictures here were taken with my  primary walk around lens, the Canon EF 28-135mm f/3.5-5.6 IS USM which, like the camera is good but not great. In the SLR world this is a small, light advanced amateur set up at only  6.5″x 5″ x 3″ and about 4 pounds compared to the iPhone 5’s 4.87 x  2.31  x  0.30 inches  and the less then 4 ounces. The padded case I normally carry my camera in adds 3/4 lbs. The padded case I normally carry my phone in adds less then 3/4 ounces. The lightweight minimal camera bag, lenses and flash I normally carry adds at least another 5 pounds.

So, first a comparison of the views from just south of the Hastings on Hudson train station (taken just after I bought my new to me whitewater kayak, but that’s a different story). 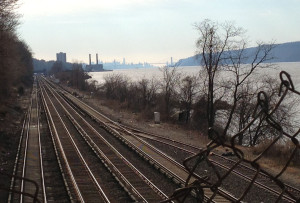 From Hastings  with iPhone

south from Hastings  with canon

No big difference if the pictures aren’t big if you disregard the white balance and cropping which I could adjust on the computer if I wanted.

But if you blow them up, well, not even close, with the i-phone really over sharpened. For the non-technical, that’s the white outlines around the branches that make them pop at low resolution but look bad at higher resolution. Sharpenning, like blur, can be added easily using any photo editing software but once in the original can’t be taken out, so I and most photographers prefer to capture the image unaltered and edit later.
The canon blows up to about 2x the size and it still looks better, so in real world numbers, the I-phone would print OK at 4″ x 6″ but by the time you got up to 8 x 10 it would look pixelated up close. The i-phone picture even in this well lighted condition could only be blown up to about 50% size. The canon, on the other hand, would print well at 16 x 20. Bigger then that requires a bigger bank account and a bigger apartment then mine as well as professional quality cameras. In fact it even looked better at 200%. 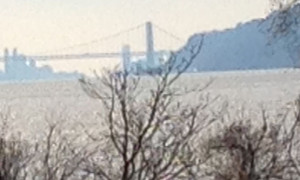 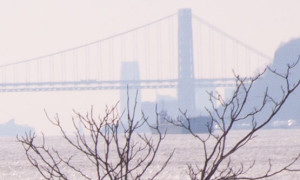 Now here’s some more challenging lighting conditions, but the most commonly used. Indoors at a children’s Christmas concert. There must have been a hundred phones recording this concert (In post Sandy Hook days of Christmas spirit, one armed policemen, 2 security guards  3 ID checkers, 4 digital cameras and 500 screaming children… But I digress).

By speeding up the exposure speed the good camera comes out sharp and the IPhone, well, I took several shots and none of them were very good and this school gym was well let compared to the average. I shot at iso 1600 using my 3.5 -5.6 zoom whereas I often shoot at 3200 using a 1.8, meaning there was 8 times as much light as I often have. 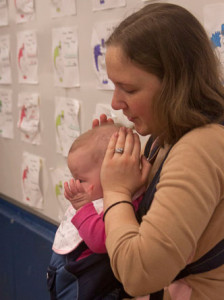 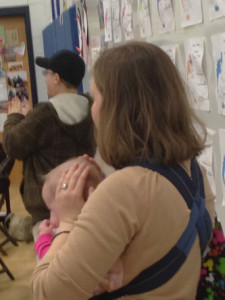 The i-phone, which shot at 1/20th of a second would need 1/2 second to get the same exposure. Any guesses on how many kids hold still for 1/2 second?

Getting the most from the IPhone’s Camera

It’s really  a matter of understanding the limitations of the IPhone camera is using a going back to basics approach to photography.

The point…that the i-phone might be a good camera phone, but it isn’t close to a good amateur camera.  Based on this I guess I’ll next need to compare with a cheap digital camera but will keep using the IPhone as the best camera is the best camera you have.