Like visiting an old friend whose changed a lot….probably don’t need to tell any North Jersey Paddles that Irene made some changes. 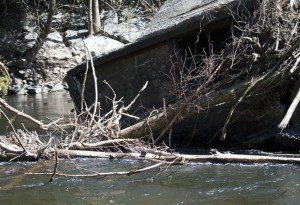 Fast water (for the Ramapo) under log jam at dam

The old broken dam south of Suffern has a bad sweeper in the fast water. It is viable from the approach. I think the metal rebar that used to stick out the side is gone, so once someone clears out the sweeper this section will be safer then it was.

The section between 17 and Halifax Road, affectionately known as the below the Mason Jar section, is a real mess with at least 3 portages. The most surprising is a tree on the right bottom side of the island by River View Drive…paddling back up current is a chore at low flow. I pulled out at Halifax Road so don’t know what it is like below that…

For anyone following the news the damage to the train tracks that run along the river is probably the most catostrophic….

On the plus side, the erosion and lack of trains offered a convenient new launching site. Driving north I hit traffic approaching Sloatsburg and pulled into Dave’s Sports Shop. Previously the launch would have been down a steep gravel bank, but the flooding re-sculpted the bank into an easy carry (albeit a little circuitous to get around undercut and twisted tracks). Unfortunately for paddles and fortunately for commuters the railroad has been hard at work fixing the tracks so by October it was once again a step launch.

There was little sign or smell of the fuel spill (http://green.blogs.nytimes.com/2011/08/30/a-ramapo-river-spill-is-being-addressed/ ) …for those of you who visited the river post Irene the smell was pretty bad, so this is good news. You notice it only in backwaters on still days.

Appearently a dam failure in Arden at the headwaters of the Ramapo added to or possibly even caused this extensive damage. See  http://www.strausnews.com/articles/2011/09/20/photo_news/news/1.txt .

Between 17a (the highest normal launch) and Tuxedo the portages are not much better or worse then usual (which means pretty bad). Though there are a couple of fun rapids the stretch is hardly worth the 2 portages around the falls and old industrial works. 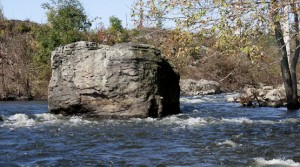 Would like your comments on other parts of the river as it looks like we’ll continue to have a wet fall and I’d like to know how things are.

And if things dry out a bit I’d like to go out on a river clearing expedition with chainsaws and other implements of destruction.  Let me know if you are interested in joining or leading a clearing trip. 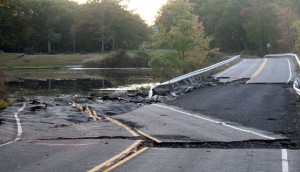 Incredably this minor repair is not being made

On Route 210 (which becomes 17 a when it leaves Harriman or Rockland County) the pavement was dragged by the force of the water in what is normally a lake. Incredably months later this is still not repaired leaving both the east/west routes through 50,000 acre Harriman Park blocked.