Ridgefield Park dominated but Cliffside Park was able to tie it up it in the final minutes of regulation. 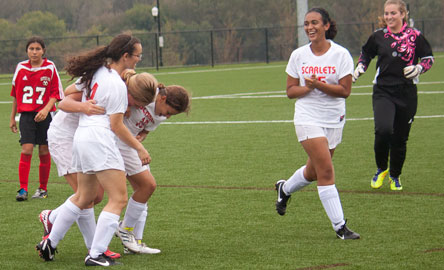 Most of the way thru the second overtime Ridgefield Park scored on a long kick and the girls exuberance was a thing to behold.

Game was played at the new Overpeck Park fields….the county spent millions converting this trash heap into a park and did a hell of a job. Nestled between a tidal basin controlled by a flood gate (so it’s really a lake) and I-95, the field was beautiful, the views of the back side of the Palisades and the city spectacular. Did a short paddle around after the game and some egrets posed for me.