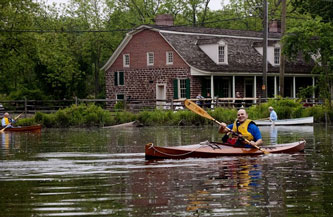 Benjamin Donson with his son Julio Valle  and Jim Norman met me in Hackensack’s Johnson Park.  Ben and Julio paddled Jim’s wooden kayak and Jim paddles his replica 1800s solo canoe. Andy Anderson rowed down in his replica rowing dingy. All are similar to boats that would have been used on the Hackensack many years ago.

For anyone looking to emulate our trip, be sure to check out my guide on how to paddle the Hackensack.

We arrived at New Bridge Landing where we were allowed to land on the New Bridge Landing side. The New Bridge Landing (west) side of the river has long been posted ‘No fishing, dumping or boat launching.’ I reached out to the Bergen County Historical Society, which responded that the had posted it due to littering, abuse of the historic wharf including motor boat launching and even chemical truck dumping. According to Mike Trepicchio of the Bergen County Historic Society,  ‘We have been protecting and preserving the landing as well as the River since 1944, Frank Koehler, a long time past president of the BCHS is credited as being the first Hackensack riverkeeper, as well as steward of New Bridge. We keep his tradition alive, by respecting the Landing and keeping abusive uses from the River. If the use is compatible with our mission of protection and preservation and permission is requested and granted, we welcome the company.’

Event ran from 1 to 5 p.m. on Sunday, May 22. Pinkster is the Dutch name for Whitsunday or Pentecost, when a flower-crowned May Queen and King led merry-makers from door-to-door, gathering dyed eggs, butter, bread, cream, coffee, sugar, and tallow candles in baskets for a festive supper and dance. Toasts with buttermilk, known as “white wine,” and recital of the Pinkster Ode welcomed the return of summer. The name of the holiday derives from the Greek word, Pentecost, meaning “50th day,” which originally signified the ancient Jewish celebration of the first fruits of the harvest, arriving seven weeks after Passover. On the seventh Sunday after Easter, Christians commemorate the descent of the Holy Spirit upon the Apostles. The English identified this holiday with the white garments of baptismal candidates, calling it Whitsunday or “White Sunday.” Among the Jersey Dutch, a rose-colored Azalea blossom, known as the “Pinxter blomachee,” was the May bush.More info on the event from the Bergen County Historical Society