After much back and forth we hiked down the damn dam (aka F. E Walter Dam) and launched in the rapids of doom which proved to be almost nothing, though certainly enough to wake you up and probably the steepest drop on the entire the river…and many hours later we made it the Glen.

Probably too many miles but really beautiful. Camping at Mauch Chunk Lake the night before watching the moon slowly traverse the lake was a bonus.

And a plug for the swiftwater rescue training course I took a month ago. At the put in at White Haven a couple of guys launched in a 2 person plastic pool toy quality inflatable kayak and promptly wrapped around a small bushy tree.

The Whitewater Challengers raft leader next to me first jeered, then said ‘we warned them’, then said ‘someone better help them’ That’s when I looked up from stowing the gear in my boat. More below pictures of trip…. 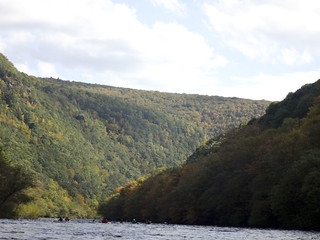 lehigh not quite mega
10 photos

Both guys were stuck on top of each other in the kayak-like plastic toy. Turns out front guys feet had slid under the footrest which was nothing but an inflated tube running across the boat effectively pinning him.  Back guy slipped into and under front guy pinning back guy. Only front guy’s hold on the tree with one hand was keeping both of their heads above water and neither of them had anything solid in the boat to push against nor a knife to cut themselves out.

From the swiftwater rescue training I knew right what to do.  Walking down along shore till I was just below them I waded in thru fast water over my knees into the waist deep eddy the 2 stuck paddlers were creating. One of the guides braced me while I pushed back  guy up river and free. The guy whose legs were under the foot brace took more pushing as he was stuck almost to his waist, but by staying in the eddy and pillow they were creating i was able to move him up. I even told them to swim feet up once they came free…Once he was out, in trying to get the raft free my footing slipped and I knew not to try to fight it and floated downstream.

By the time I walked back up they had a rope on the toy and were hauling it out. The pinned guy was quite nice about thanking me. I don’t think he went back on the water.

Knowing what to do and knowing to hurry but be calm and careful…thanks again Wayne Gman.