On June 25th 5 intrepid souls joined me for a little trip down the Ramapo.

On Wednesday several inches of rain in an hour or so had pushed the gauges up above 4000 cfs (flood stage)  but by Friday morning when I announced the trip the were down around a 1000…still a lot, but I’ve run the river at the level.

Being a relatively inexperienced trip leader I added “You should at least be able to ferry (move sideways across the stream) which is difficult in keeled boats.”

2 club members contacted my after I posted cautioning me but I decided to go ahead anyway. Launched from the trail conference and around the first big turn below 17 with no trouble as everyone stayed to the inside and avoided the strainers on the outside… 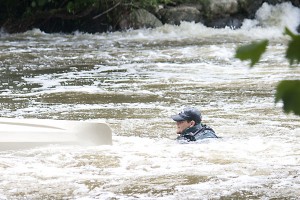 Not a HRCKC member flipped on the Ramapo...I was too busy when we had our issues to get the camera out.

But the next turn had more of a problem, with a strainer across most of the river only a few inches below the water….high enough to catch a boat and with plenty of force to turn it sideways. Debby got caught up and flipped and got pinned against it for a minute before climbing free. Her friend Phillip Horschel tried to save her and got knocked over and clear. John Bergen got flipped trying to rescue her paddle….boats and people everywhere.

We finally collected all but John’s boat…easy enough to sneak by  the strainer on the side but you had to have the experience to recognize the nastiness of the strainer. After that either Chris or I took the lead to look out for new tricky spots and we set in search for John’s boat. Found it a good 1/2 mile down stream. Sure is easy to find a yellow boat.

Patching Debbie’s paddle-cracked at the handle- was a little less successful and she flipped again when the paddle gave way going into the lake above Ramapo Reservation (nasty tree in the middle of the chute).

The rest of the trip was a bit more successful….

We watched a few young-uns unsuccessfully negotiate the dam below Ramapo Reservation and Chris sucessful took the dam above Glen Gray. 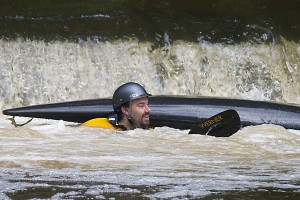 Unfortunately, I didn’t have my camera out, so he went back and we got him not making it.

Finally at 287 Chris was playing around and stuck his paddle in a rock and lost it. We searched for awhile and couldn’t find it so we paddled down to Pomtpon Lake assuming it had floated free and didn’t find it. Chris came back after shuttling and finally found it.

The next day I did the upper section from above Sloatsburg to Halifax road. More birds including the ever wonderful Merganser chicks around the dam by the thruway. A few tricky strainers including a mess by the Sloatsburg sports complex (don’t go left).As I passed under 17 approaching the strainer that caused all the trouble six men, 2 in bright red drysuits, were fighting there way thru the underbrush down to the river. They told me that I man was missing….I had to pry more information out of them as they seemed much more interested in trying out their fancy gear then actually finding the guy. Heading downstream I saw 2 people on the sandbar by the infamous strainer. One of them hailed me over, told me everyone was alright but they were missing a kayak. Sal was leading 3 friends down the river and essentially did exactly what we had done, with the first person getting caught on the strainer and the 2 other inexperienced folks trying to help and getting flipped. One of them panicked (understandably) and when he hauled himself out went running thru the woods to a truckstop on 17 and called 911.

Since all were accounted for Sal was ready to climb into my canoe and head down with his 2 remaining friends to find the missing boat but the policeman on the far shore said they had to wait till the boat showed up.

Off I went and then from under 287 comes the loudest noise I ever heard on a small river…and low and behold up comes an air boat right out of the everglades… I wave my paddle and get them to slow down and move to the side….for those of you that don’t know it, the river is all of 75′ wide… the air boat gets going and goes by fine…and then the prop wash starts sending up 3′ waves and here I am hard against a root bank largely covered with poison ivy.

The air boat stopped on the sand bar, the scuba divers emerged from the river to the surprise of the onlookers (and, surprise, they did not find anyone on the bottom of the river). I paddled upstream and in did my best to berate the guys in the boat for nearly swamping me…their response. You were against the shore, so what’s the problem.

Sal and I headed downstream to recover the missing kayak which was in nearly the exact same spot as John’s boat had been the day before.

Pulling out at Halifax Road Sal’s friends showed up to pick him up and the women who was with them asked “You are going to take us out again, right?”

What did I learn…well, I’m never leading a trip with the potential for strainers without another experienced paddler. One to take the lead and spot the tricky spots and the second to stay back with the group and explain how to get around the spot….and I am making folks prove they know how to ferry in fast water….and  starting at Ramapo Reservation wouldn’t be a bad idea either.