It’s not a black issue, it’s a justice issue. 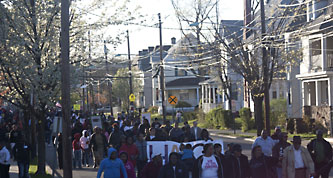 Actually felt proud of Hackensack…a beautiful spring evening. About four hundred people from various organizations participate in a march of “Justice and Solidarity” for Trayvon Martin in Hackensack. The event is being held on the 44th anniversary of the assassination of Dr. Martin Luther King Jr.

And the photographer was even caught on camera himself…http://northjersey.mycapture.com/mycapture/enlarge.asp?image=41104559 . That’s me at far left, though the Record photographer (who is probably better) had the better shot, getting faces as well as the church in the background. Don’t know if one of the other things I shouldn’t say is that I have never been to a peace or justice march I didn’t enjoy. Out for a walk with a bunch of nice people. If only the other side didn’t have to butt in and wreck the festivities. Not that there were problems here, with the county exec, a whatever you think of them, doing a good job and leaving no doubt that the marchers had the right to the streets.  I’m sure the county exec didn’t walk, but at least she spoke, though not nearly as eloquently as the many preachers who know when they have a crowd and how to carry it.